In the last twenty years, the study of the history of international law and of international relations has witnessed something of a renaissance. The bicentenary of the Congress of Vienna (1814-1815) also led to several new publications on the Congress System and on the “security culture” that was established in the aftermath of Napoleon. Nevertheless, many lacunae remain, especially regarding the relationship between law(s) and international relations during the long nineteenth century and in the sociocultural history of international law as a discipline with its own actors, networks, venues, institutions and power circles. The aim of the present conference is to deepen our study of the interconnections  between law(s) and international relations through the eyes of a plurality of actors (e.g., legal advisers, lawyers, judges, activists, publicists, journalists, editors), institutions (e.g., foreign offices, courts, universities, academies of science, associations, libraries) and works on comparative law.

Three focuses will be especially addressed by this conference. The first is the plurality of actors. We welcome proposals on legal advisers within governments, foreign offices and national or colonial administrations; on civil and administrative judges, admiralty courts and prize laws; and on lawyers, academics, peace activists, international thinkers, journalists and editors, including women as well as men. A prosopography of a group of actors is invited as well as individual biographies. The theme of the birth and professionalization of “international lawyers” will be studied as well as the various editors and the book market for international law.

Our second focus will be on institutions. We especially invite papers studying the treatment of law(s) in foreign offices in a comparative perspective. For example, in Great Britain, legal issues were dealt by the Queens Lawyers until 1872 and afterwards by the Legal Adviser of the Foreign Office. In France after 1835, it was the Comité consultatif du contentieux that dealt with legal issues. But what about the foreign offices of other countries? Other institutions (similar to the Conseil d’état in France) may have also had their own “Foreign Office Committee.” How were these organized? Did they cooperate with the foreign office?  What role was played by scientific academies in the diffusion of international law? By the universities? By popular libraries?

Our third and final focus is on the study of comparative law and its link to the development of international law. The Société de législation comparée, founded in 1869, was full of members of the first generation of the Institut de Droit International, while many comparativists were, vice versa, members of the Institut de Droit International. Scientific journals such as the Revue historique de droit français et étranger and the Revue de droit international et de législation comparée dealt with both comparative and international law. Papers on the progressive autonomy of the discipline and on the networks of the founding members are especially welcome. 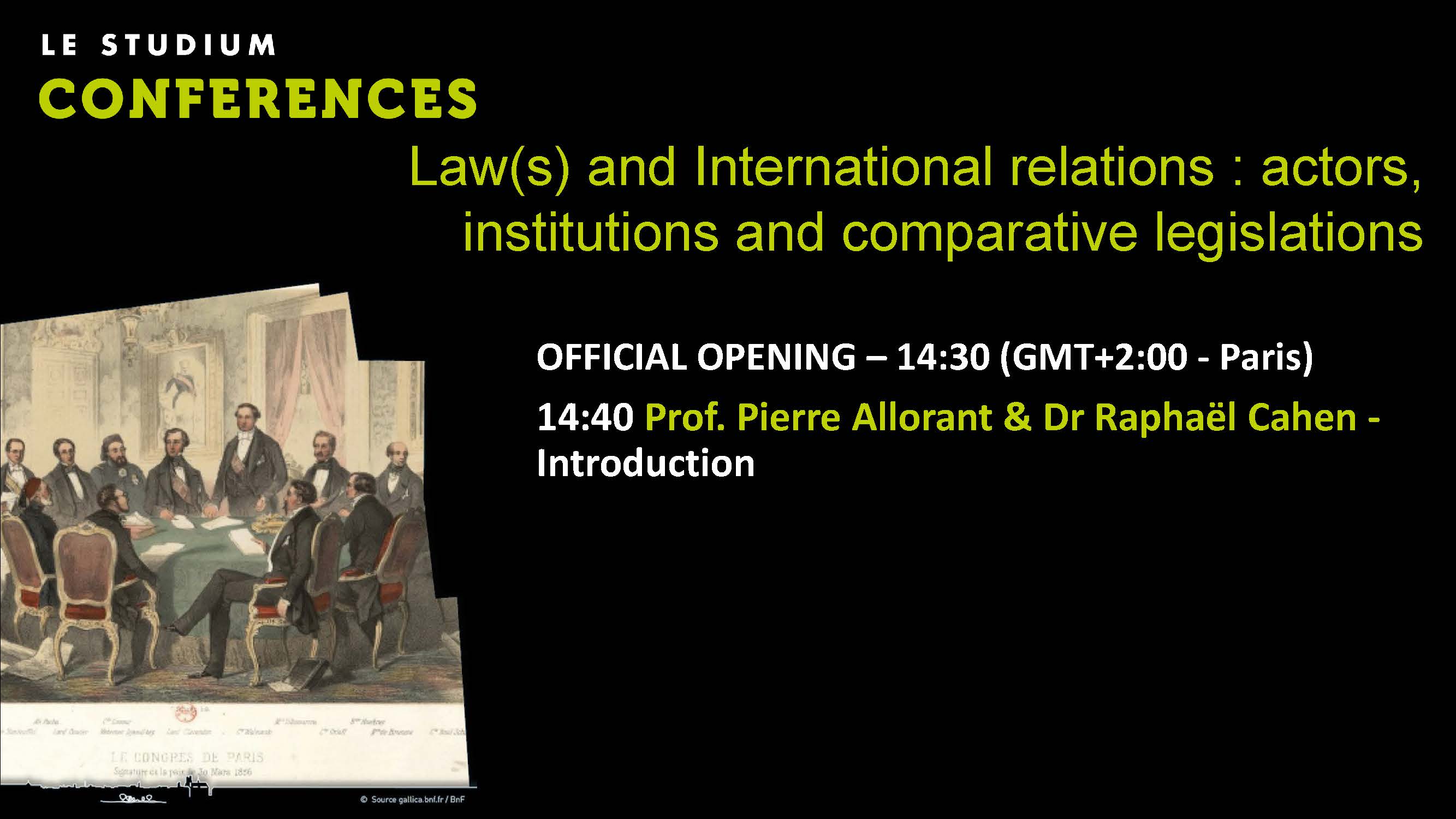 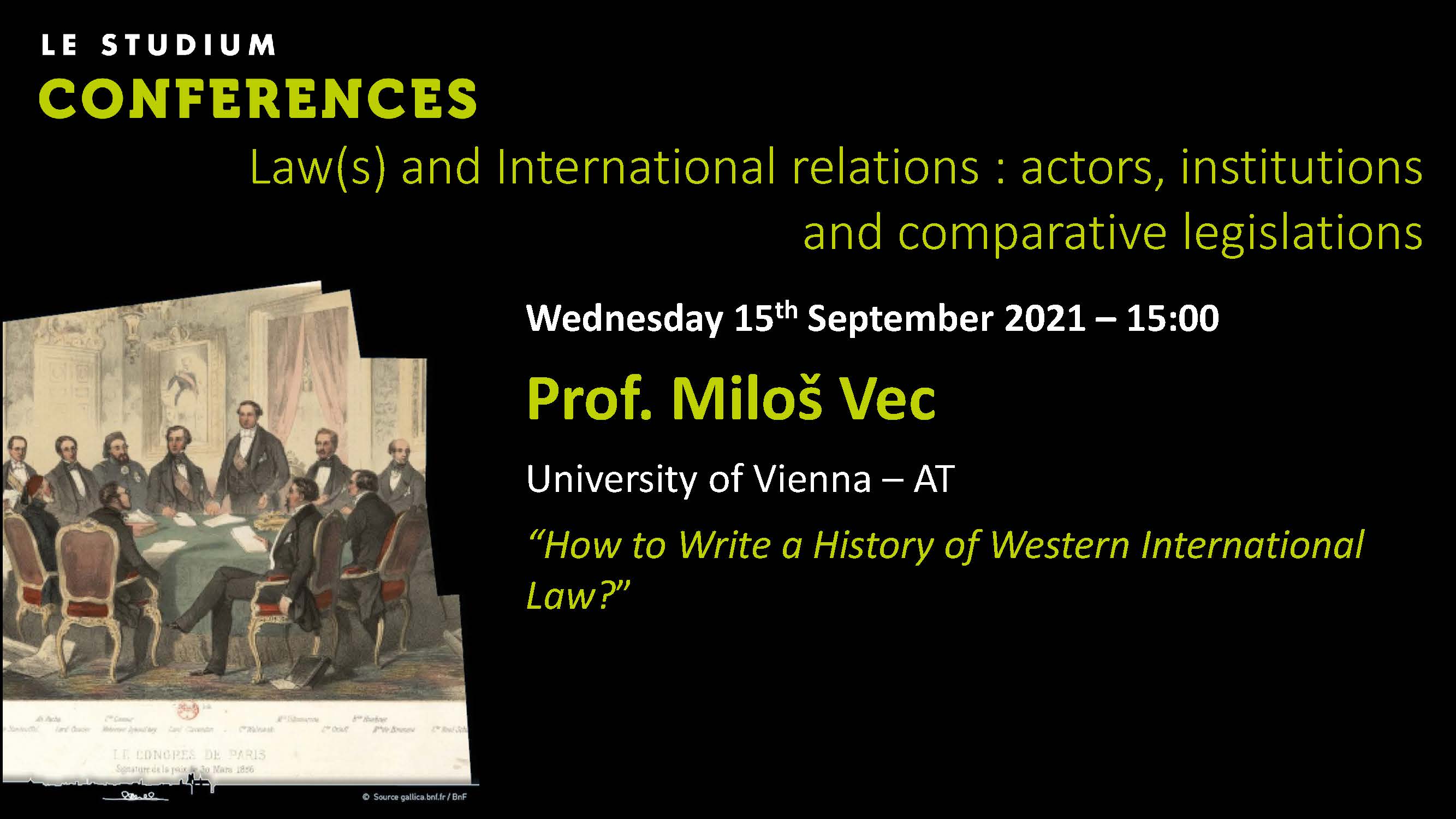 Conférence
00:48:03
Favoris
Miloš Vec - How to Write a History of Western International Law?

My presentation focuses on some historiographical challenges which I face as the co-editor of the CUP volume on “Western International Law, 1776 – c.1870” (edited together with Prof. Paulina 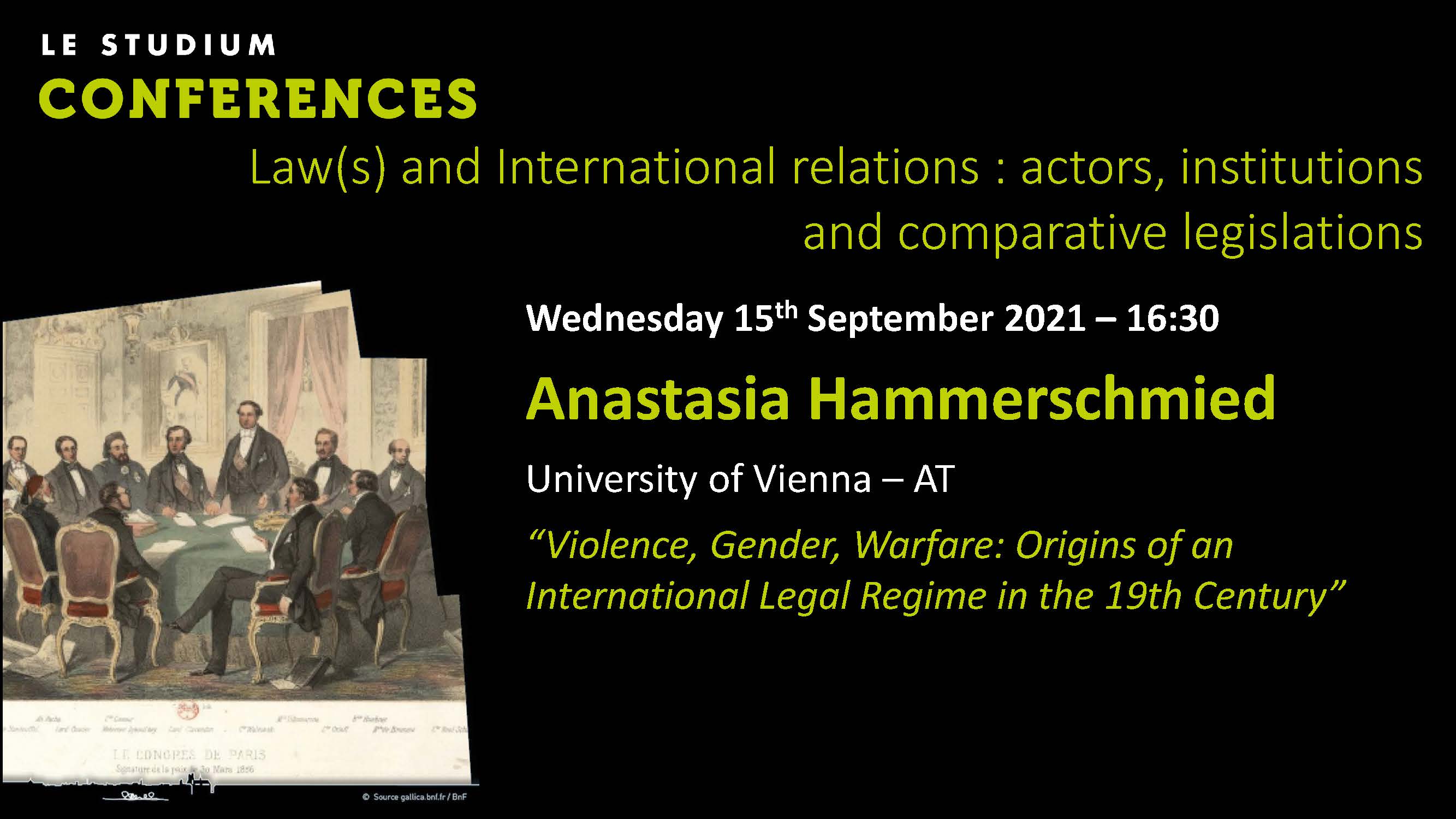 "The honor and rights of the family ... must be respected", states Article 46 of the Hague Convention of 1899/1907, a phrase used by earlier studies on sexual violence in war to reject a 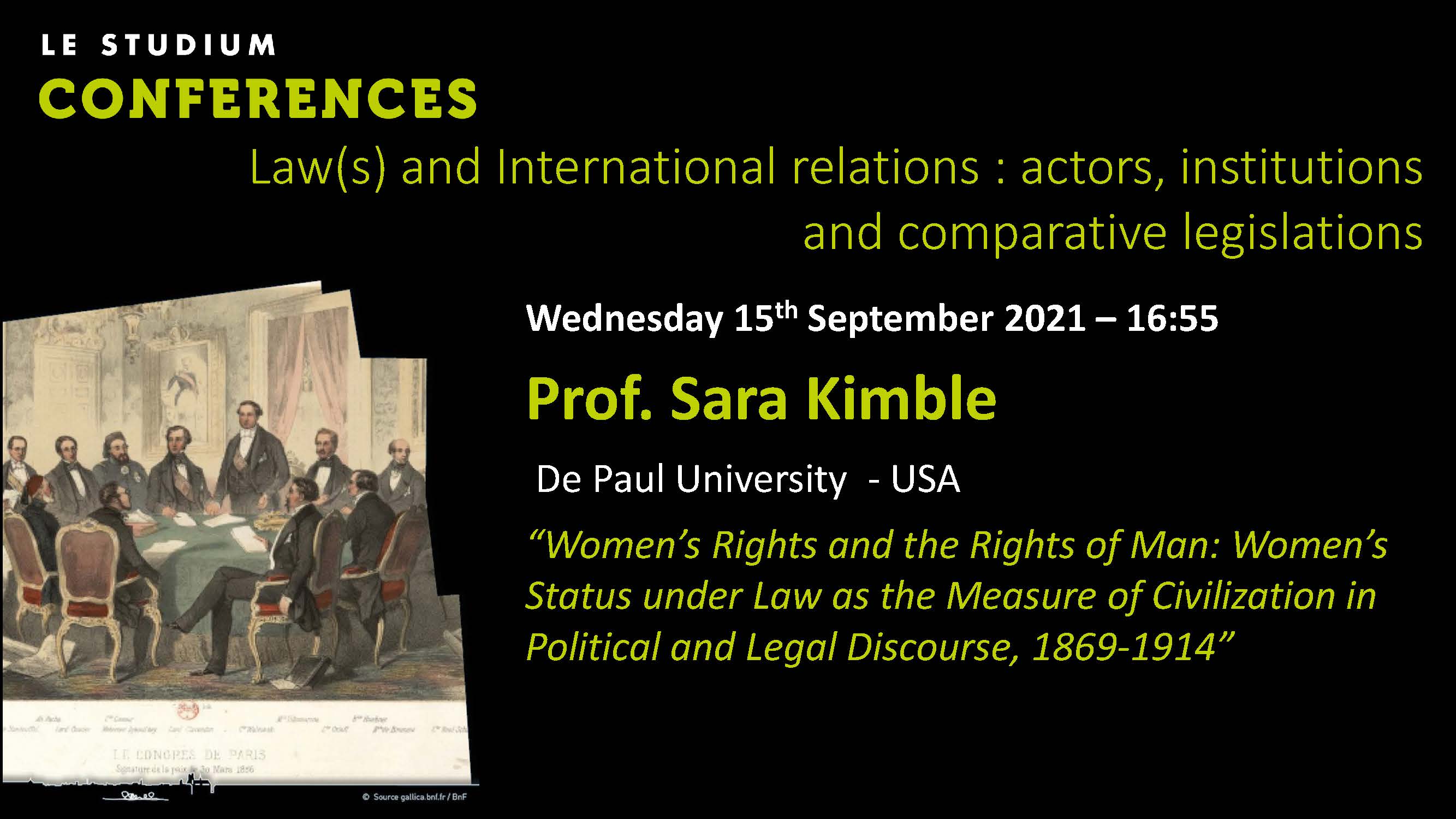 Conférence
00:27:19
Favoris
Sara Kimble - Women’s Rights and the Rights of Man: Women’s Status under Law as the Measure of Civi…

This paper explores the conceptualization of women’s rights as a measure of the advancement of societies in comparative perspective through political and legal discourse from the 1860s to 1914. My 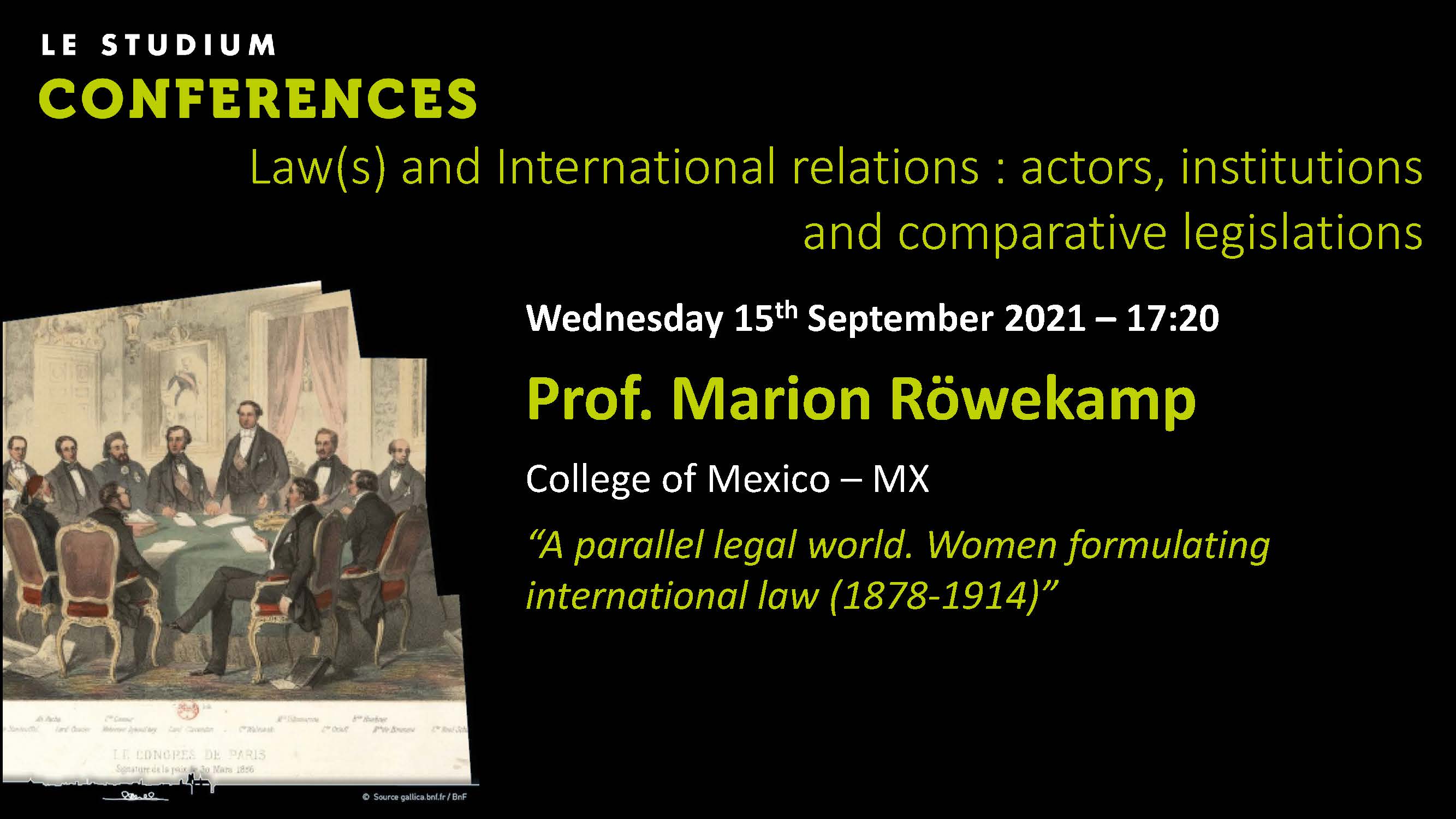 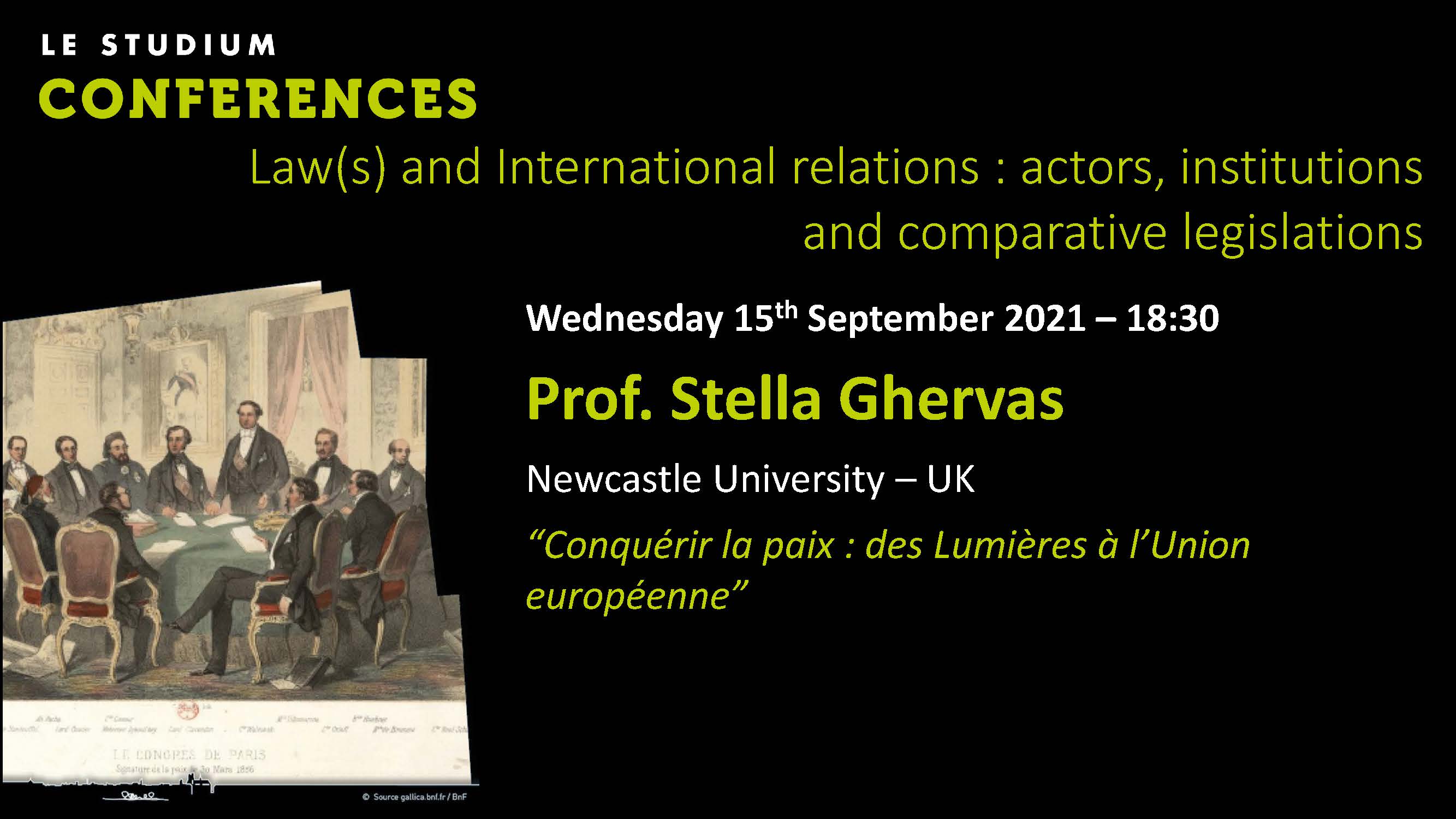 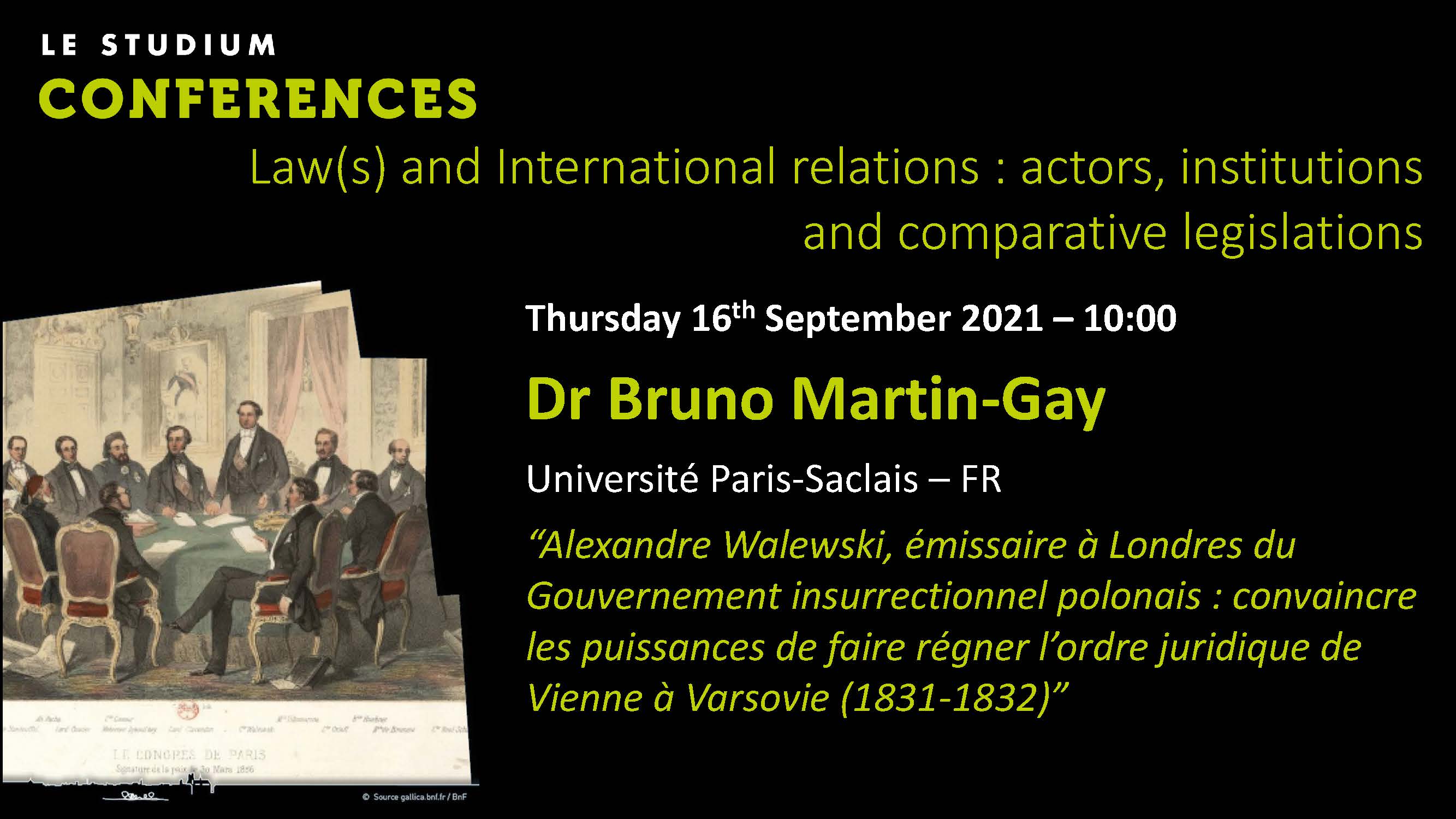 At the Congress of Vienna, the Polish question was a tricky one and depended mainly on the Russian position. After Napoleon’s escape from Elba, the discussions became harsher and Tsar Alexander I 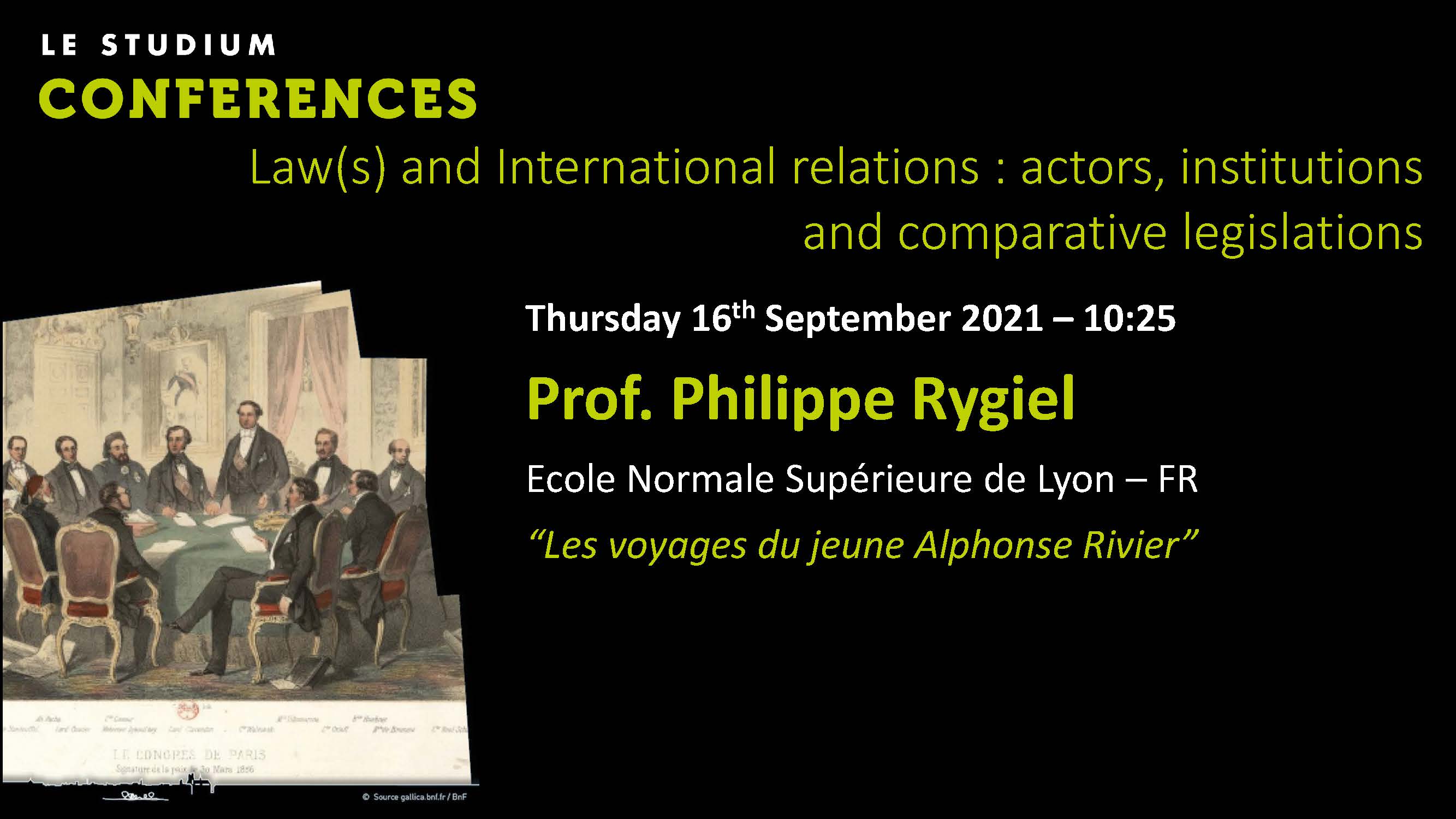 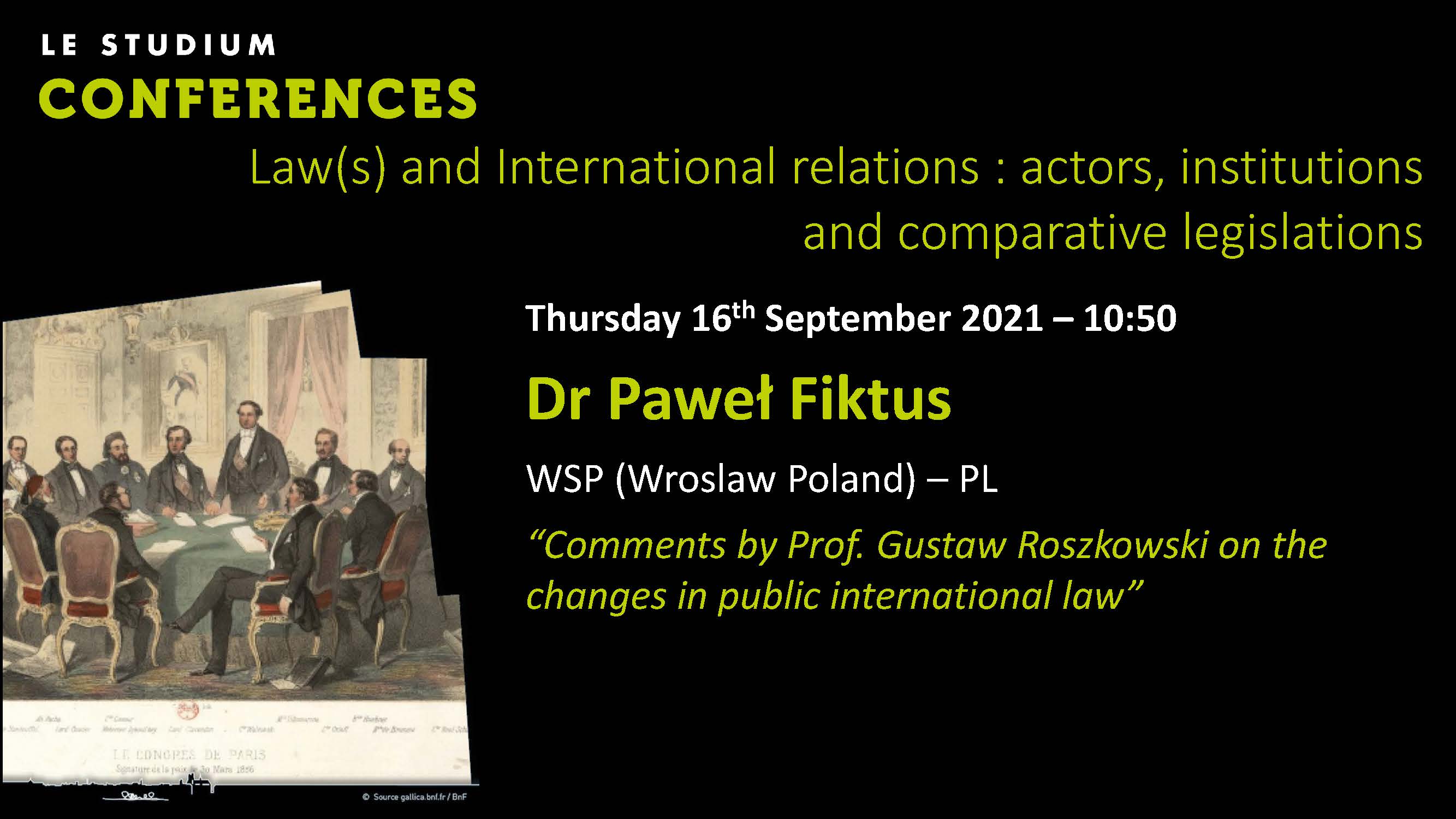 The presented topic refers to the first point and will concern one of the leading but somewhat forgotten lawyer – Gustaw Roszkowski associated with the University of Lviv. In addition to his 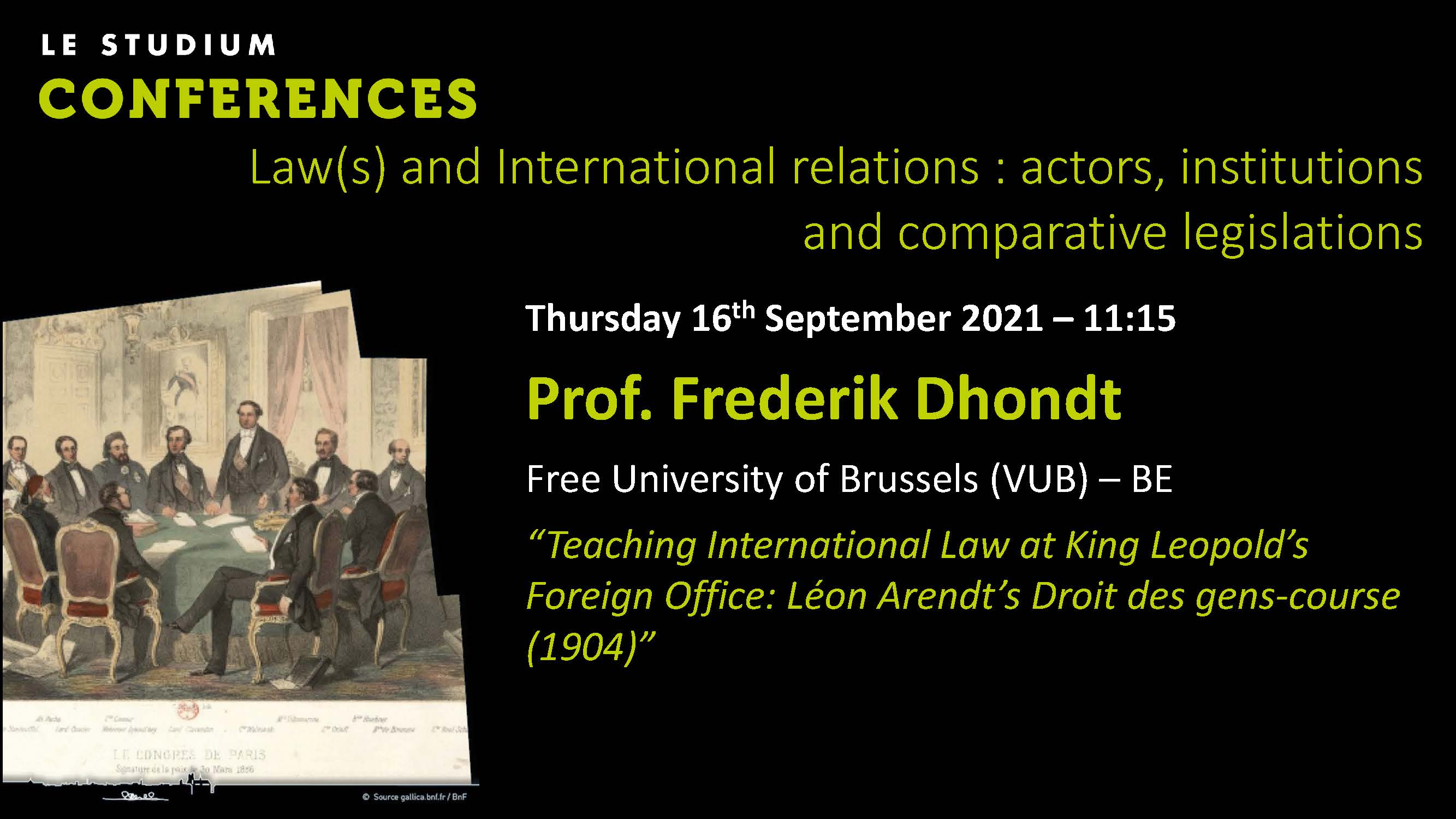 The private papers of Léon Arendt (1848-1924), director of Political Affairs in the Belgian Foreign Office from 1896 to 1912, offer a unique insider’s view on an often little-studied aspect: the in 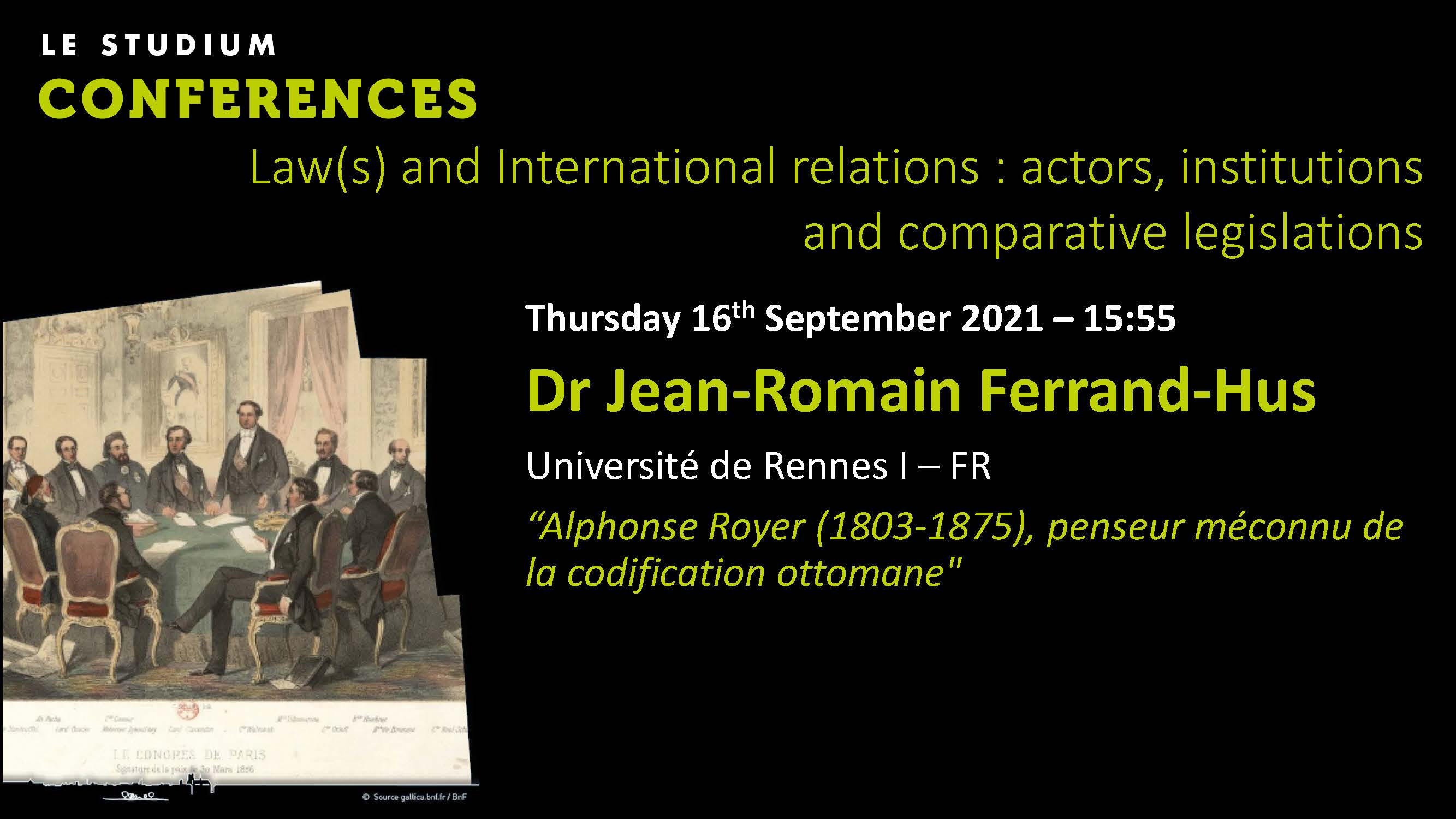 On 15 March 1856, as the Congress of Paris is opening, Alphonse Royer – a man of letters, an Orientalist and a traveller who had become director of the Imperial Opera – hands Napoleon III a note on 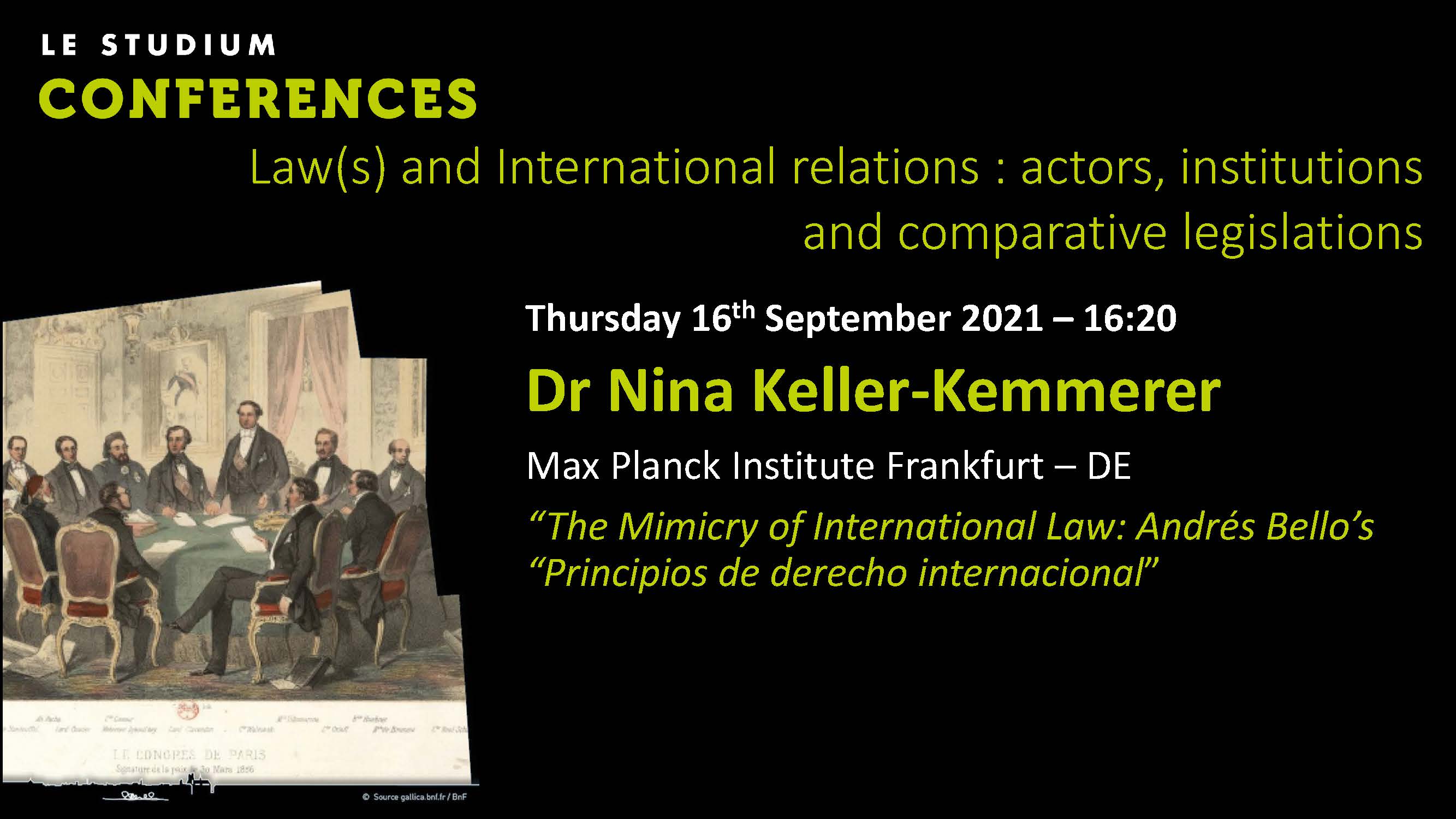 It was the creole intellectual Andrés Bello who first promoted the European doctrines of international law in Hispano-America. 1811 he went together with Simón Bolívar on a diplomatic mission to 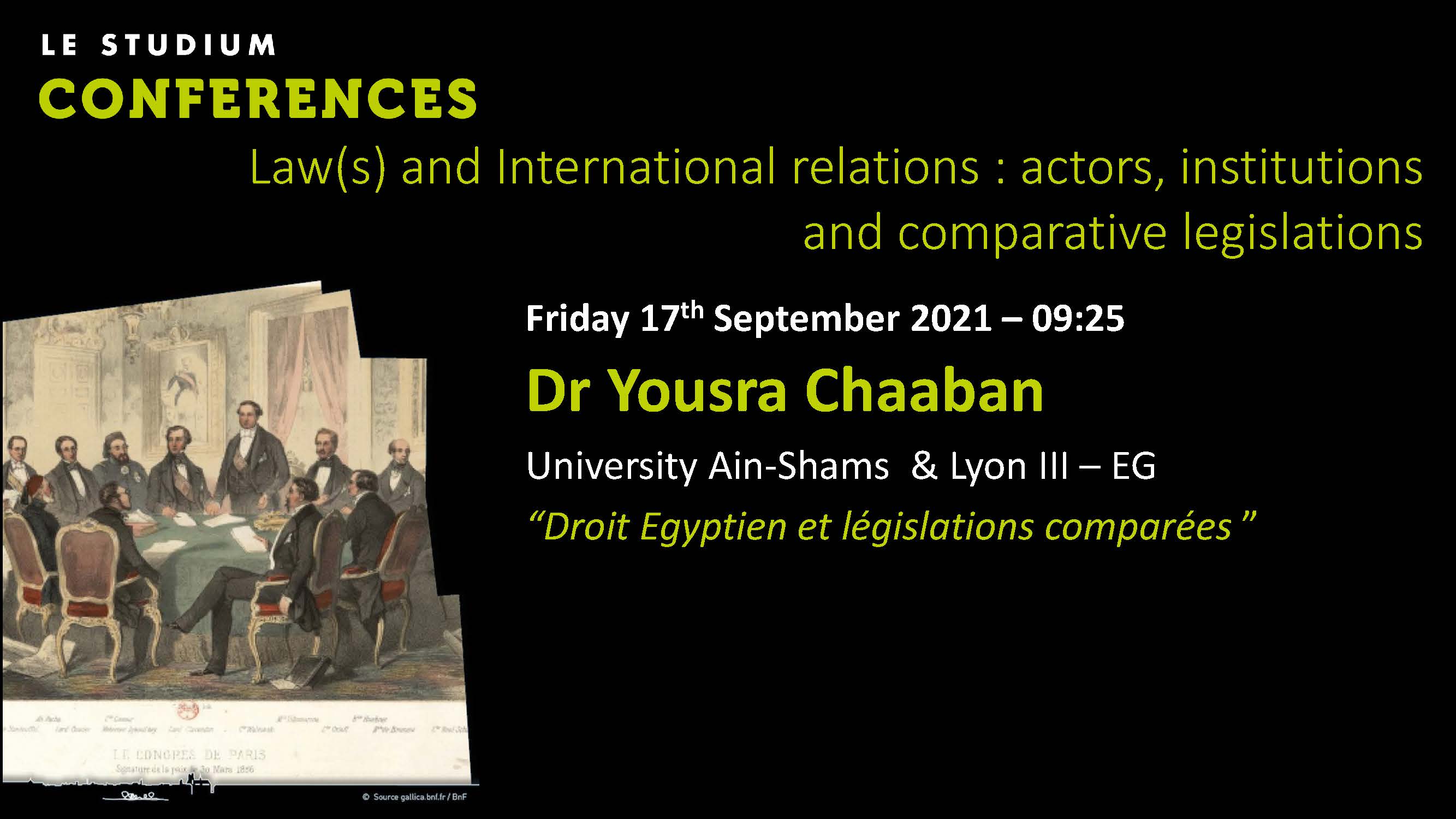 On the other side of the Mediterranean, at the end of the 19th century and at the beginning of the 20th century, international relations, and particularly French ones, played an important role in 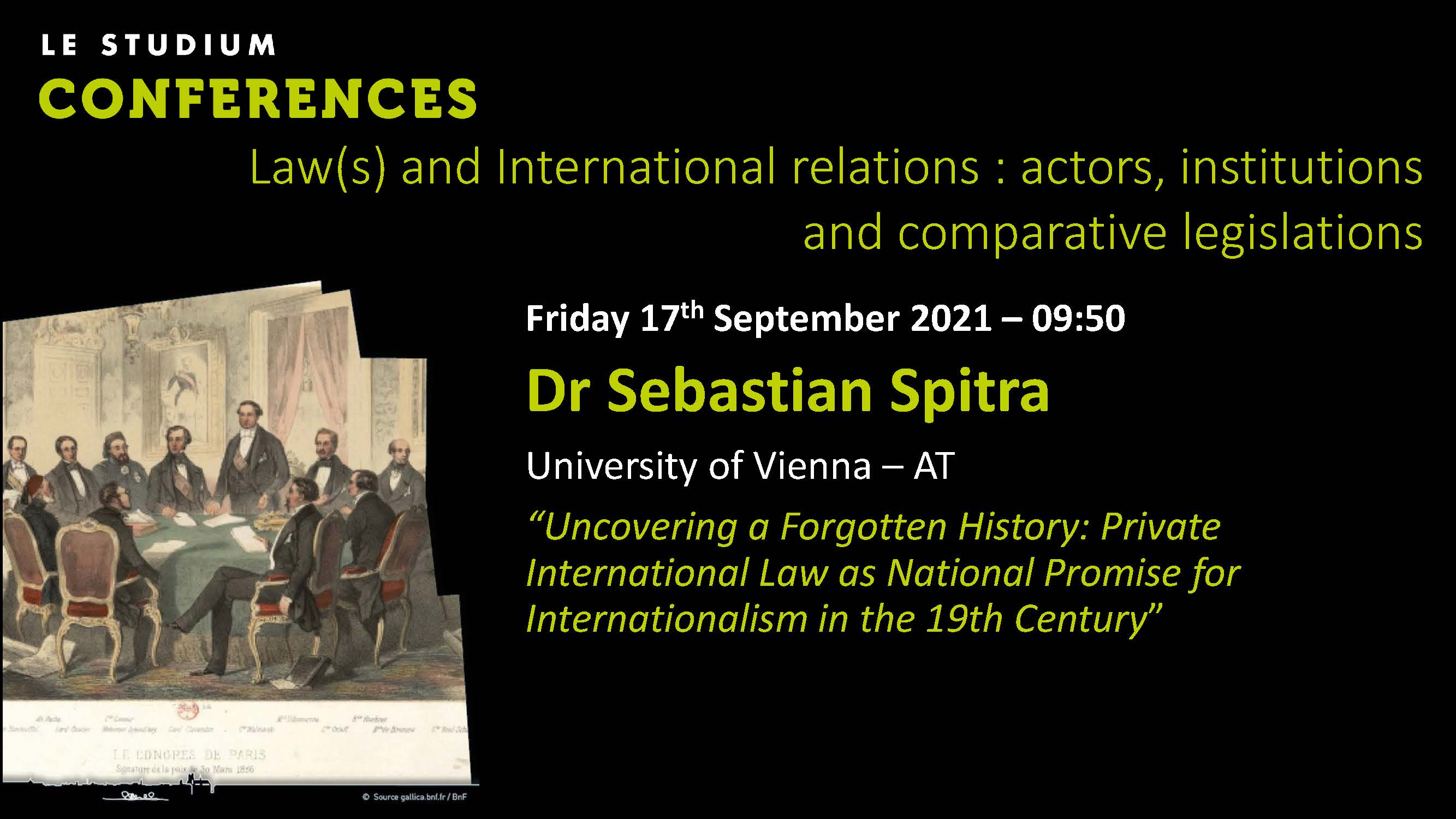 The historical study of private international law is an often-neglected topic within the broader turn to the history in international law. Only a few works explore the dogmatic, intellectual and 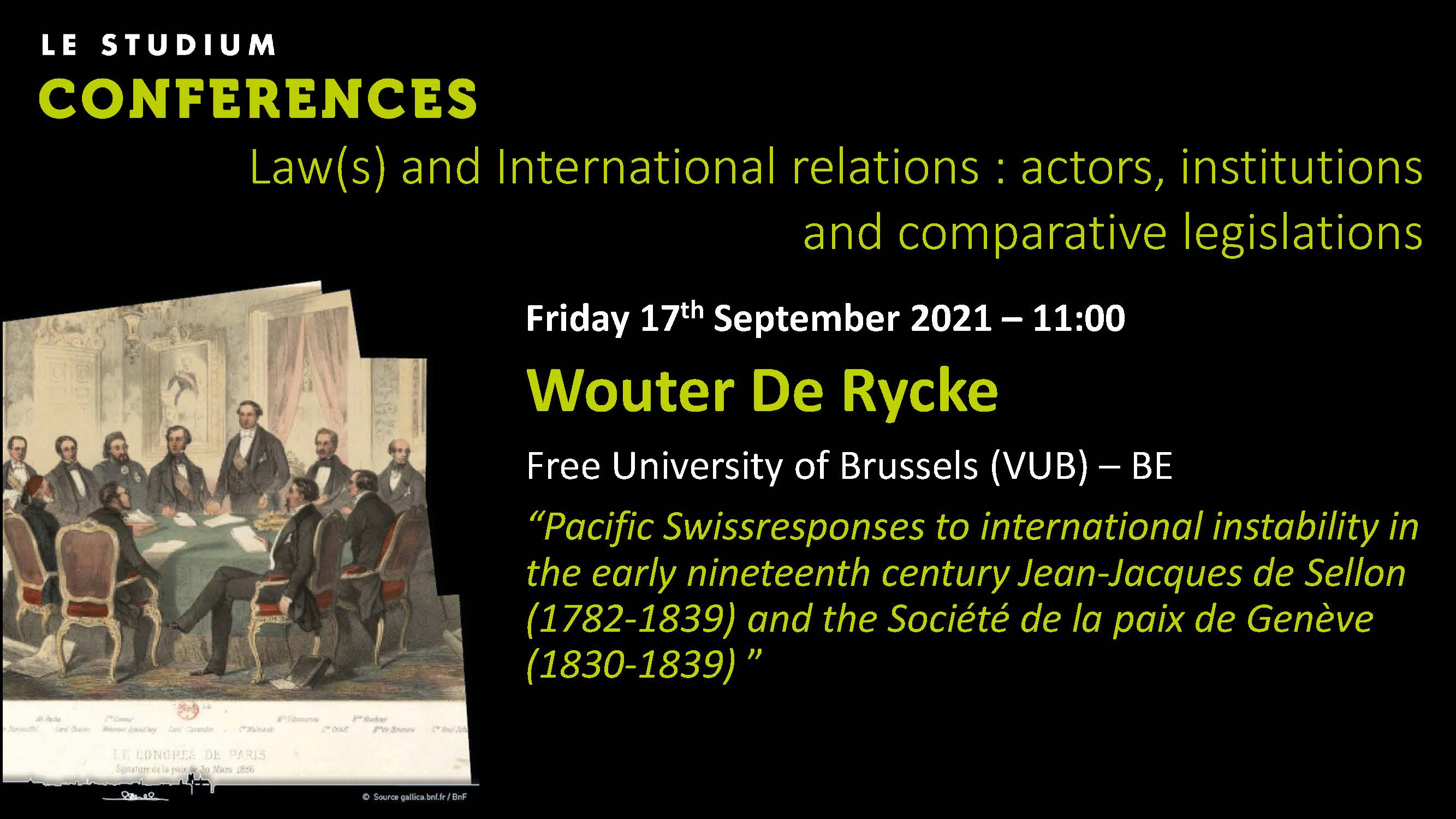 Although socio-legal histories are on the rise, little scholarship has been devoted to the legal aspects of the early to mid-nineteenth century pacifism. Those who have taken notice of the so 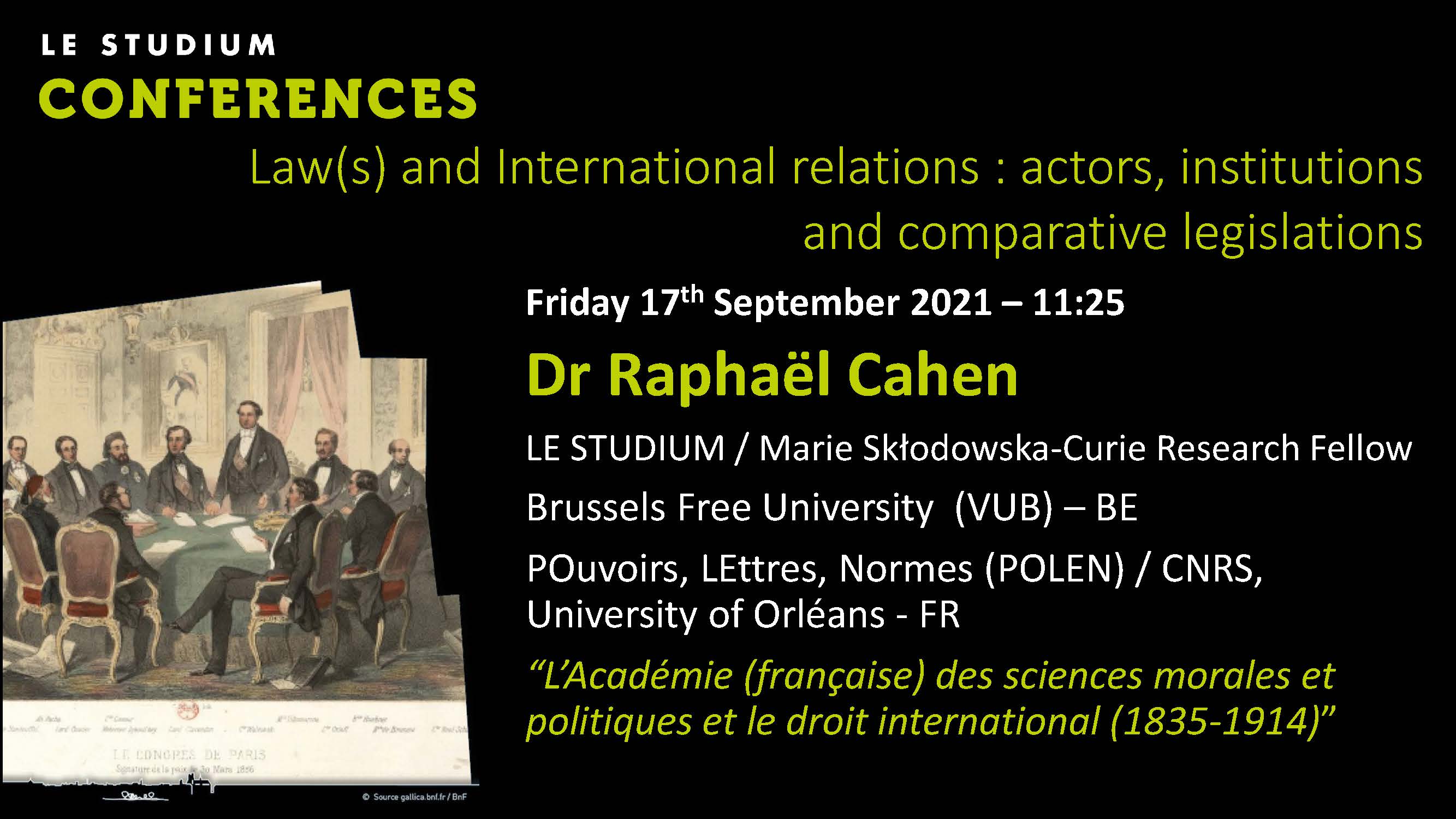 From his foundation in 1832 until Word War I, the French Académie des sciences morales et politiques has been a place of Knowledges where the discipline of international law has been constructed. 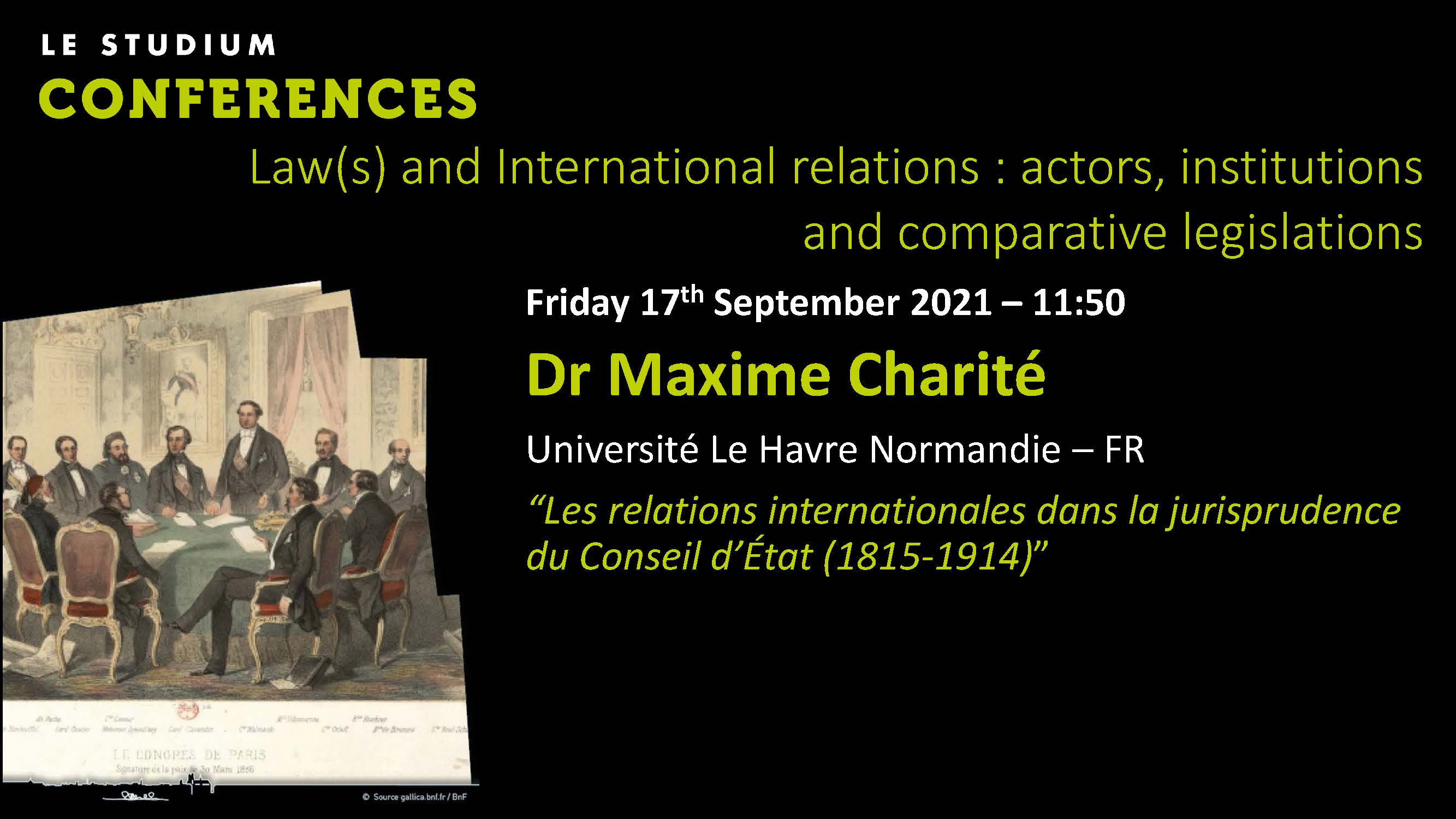 Council of State case law appears as an original prism for understanding and measuring the relationship between international relations and law(s) between 1815 and 1914. During this century, this 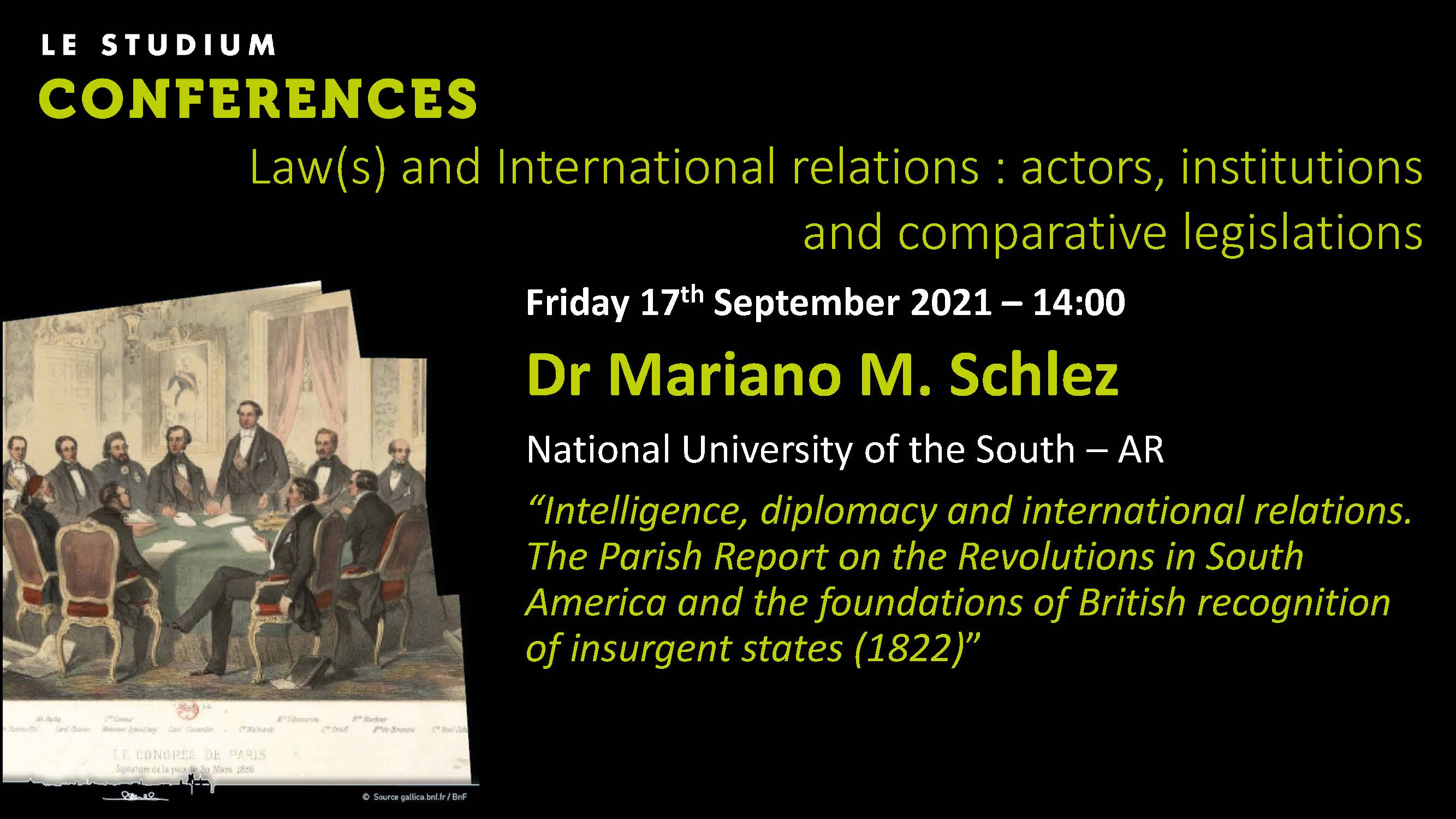 My work presents a description and explanation of the historical significance of the unpublished intelligence report "South America", written in 1822 by Woodbine Parish, clerk at the Foreign Office 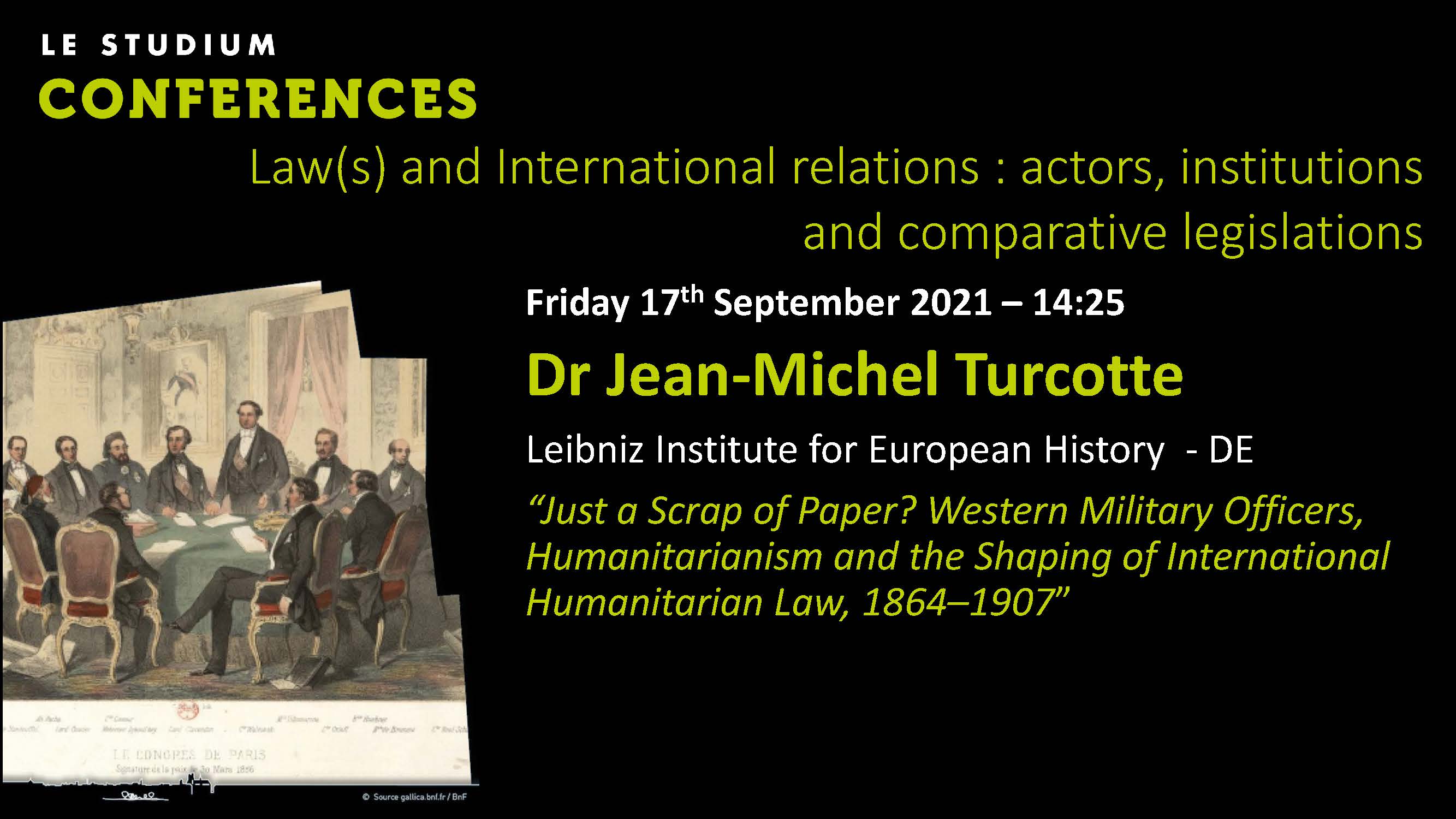 This presentation takes a look at my new book project focusing on the history of the Geneva Conventions. The first Convention for the Amelioration of the Condition of the Wounded in Armies in the 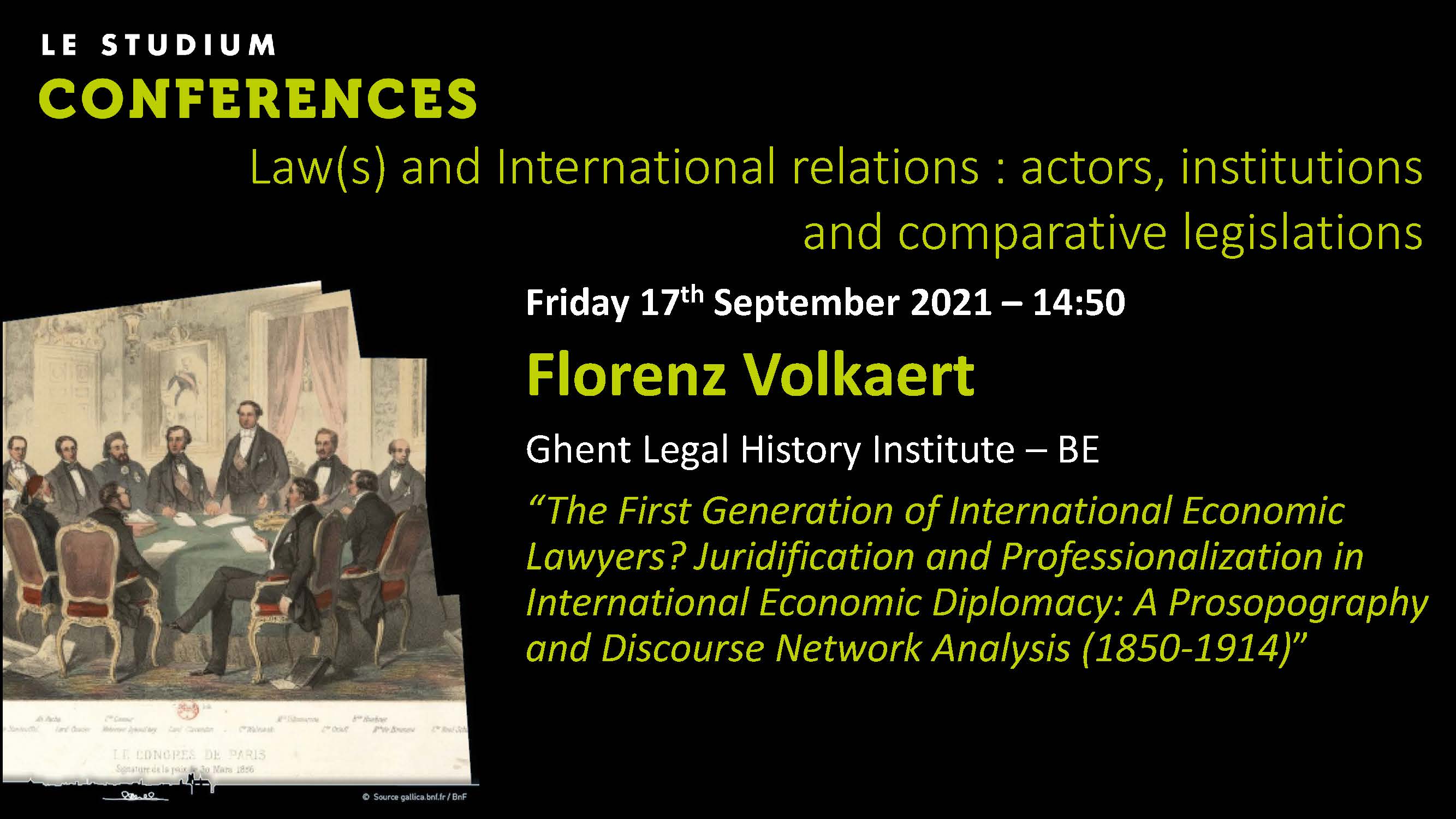 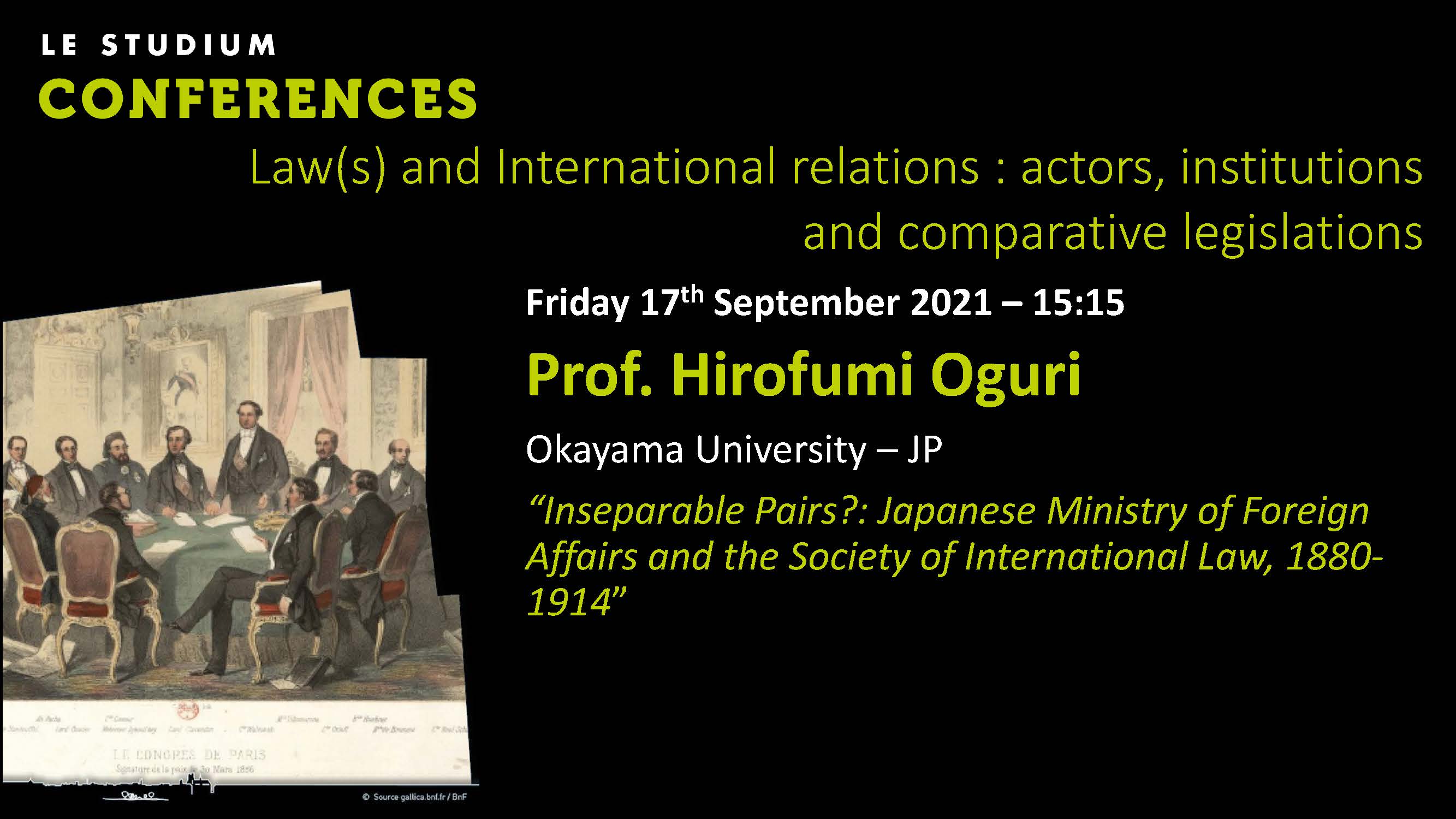 The reception of European international law in the Meiji era (1868-1912) in Japan is characterised as full of ‘pragmatism’, based on the primary foreign policy adopted by the government. For